Zachary Joseph Marco, born September 20, 1989, was tragically taken from us on October 17, 2010, at just 21 years of age. The oldest of three children, Zack was a junior at Barrett, The Honors College at Arizona State University, where he was studying Political Science and Philosophy. He planned to join his father in the practice of law after college and law school.

Zachary was beloved by his family and friends and by numerous people he met at ASU, where he tutored Political Science students, as well as at Red Mountain High School where he lettered in football, wrestling, and cross-country. He made many friends at the Arizona State Senate while serving as a Page, and he left his mark upon them all. Zack also participated in a number of service organizations including Habitat for Humanity. Zack is dearly missed, always loved, and always with us.

Daniel J. Marco is an attorney turned writer. On October 17, 2010, two men murdered his son, Zachary. With Daniel’s help, authorities identified and arrested those men a month later, and now both men reside in prison, one for life. On the day his son was murdered, Daniel ceased to be the dynamic and successful criminal defense attorney he had been up to that point and began on a very difficult journey of not only learning how to cope with his son’s death and the crippling grief that came with that loss, but he also had to find his way to a new professional purpose. Still a licensed attorney and a survivor of grief, Daniel has begun a second career as a writer.

You can visit Dan’s Blog Here: My Son Zack

Barbara Saint John is a Grief Recovery Specialist, nationally acclaimed lecturer, author, relationship consultant, transformational coach, and businesswoman. Incredibly intuitive to the intricacies of human nature, she is capable and effective in the variety of roles she has. She is well known for her outstanding speaking and communication skills. While serious about all her subjects, she has a special way of presenting her material in a humorous, entertaining, nonjudgmental, and informative manner. For many years, Barbara Saint John has been a “consultant to the stars” with offices based in Beverly Hills, CA, and Scottsdale, AZ. She has worked with many famous actors and actresses, television and film writers, producers, and directors.

This book was written as part of a Grief Specialist exercise over the course of three years. 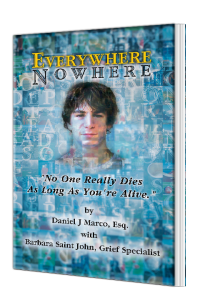 The reaction we received from other people who read the manuscript as part of Barbara Saint John’s Grief Specialist sessions convinced us that this was something that should be published. We are surprised and grateful for the positive response. It is our fondest wish that this book may help you find your new normal!